Geophysical surveys in the area where the Sakhalin-Khabarovsk-Vladivostok gas pipeline crosses the Nevelsky Strait and Amursky Bay, 2008 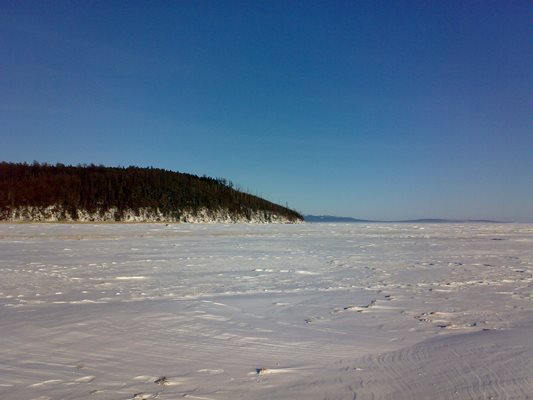 During the winter period of 2008–2009, MSU Geophysics LLC performed geophysical surveys as part of engineering and geological surveys in the Sakhalin-Khabarovsk-Vladivostok gas pipeline crossing section across the Nevelsky Strait and the Amursky Gulf. The program of work provided for a complex of geophysical studies, including methods of electrical exploration, seismic exploration and magnetic exploration.

Geophysical studies at this site were carried out with the aim of comprehensive study of the natural and man-made conditions of the route, sufficient to substantiate design solutions for construction and measures for engineering protection of the territory and structures from dangerous geological and engineering-geological processes.

In order to achieve the goals set, the following tasks were solved at the gas pipeline crossing the Nevelsky Strait and the Amursky Gulf:

The specificity of landscape and climatic conditions determined the choice of geophysical methods to obtain the necessary engineering and geophysical information about the section.

Work site in the Nevelsky Strait

Work area in the Nevelsky Strait and on Fr. Russian is located in the land-sea transition zone. These sites require the use of special research methods, since there is no opportunity to perform work from a ship due to shallow depths and it is problematic to organize well-proven methods of electrical prospecting with direct current due to landscape conditions (rocky soils) [1]. Therefore, the winter period was chosen for the performance of the work, and the methods of alternating electromagnetic fields (GFB) were chosen from electrical survey technologies.

The equipment Tem-Fast (AEMR, Ltd., the Netherlands) was used for work using the TSB method. The set of equipment consists of a generator of rectangular current pulses and a meter combined and synchronized with it. The excitation and registration of the alternating electromagnetic field in the medium in the TSB method using an ungrounded antenna (copper wire loop 25X25 m.) (Fig. 2)

In order to obtain more detailed information about the structure of the upper part of the section, geophysical work was carried out by the method of frequency sounding. The technology of frequency electromagnetic research is based on the use of an artificial electromagnetic field in the frequency range from 4 kHz to 1024 kHz. The field is excited and measured using antennas (multi-turn frames) located horizontally or vertically at a distance of 40 meters from each other. Works by the ChZ method were carried out both in the mode of measuring all frequencies for obtaining information about the cut in depth, and in the mode of measurement at one frequency, i.e. in the mode of electromagnetic profiling (DEMP) In the modification of DEMP, information was obtained on the apparent resistance at the depth of the pipe along the projected pipeline threads. To perform the work using the methods of PR, DEM, the equipment “HF-EM” was used (OOO MSU-Geofizika, Russia).

The main task of seismic surveys was to obtain information about the structure of the medium to depths of 20–40 m., As well as to obtain initial data for calculations during seismic microzoning. In the winter, research was complicated by the presence of thick snow cover (Fig. 4). To solve these problems, seismic studies were carried out by the method of refracted waves and by the method of high-resolution transverse-wave seismic (SPW).

Seismic measurements by the method of refracted waves were carried out in the form of continuous profiling using a system of counter-catching hodographs using the Z-Z spreadsheet. The oscillation was recorded using the 24-channel seismic station Lakkolit KhM (OOO Logis, Zhukovsky). (pic. 5)

For the detection and mapping of iron-containing objects (projectiles) in the engineering and geophysical survey, magnetic surveys were carried out. In the course of the work, Minimag high-precision proton magnetometers were used (Geologorazvedka, Russia). The survey of ordinary points of the magnetic field was carried out in the pedestrian variant (Fig. 6) with the performance of variational observations (one of the magnetometers was used as a variation station) from a single control point (KP). The location of the variation station was located within the study area, characterized by a calm, even magnetic field.

All field data was obtained in digital form. Then they were transported by satellite to Moscow, where visualization, processing and interpretation of field material were performed.

After the processing was carried out using the field observation materials processing programs available from the executors, maps and sections along the threads of the projected gas pipeline were made using geophysical data, allowing in particular to assess the corrosiveness of soils at the depth of the pipe (1 m) in the survey strip. For the purpose of SMR, the boundaries and speeds of elastic oscillations in the corridor of engineering and geophysical surveys are determined. According to the results of the magnetic survey, sections of the location of iron-containing objects (Fig. 9) were plotted on Uangi (Sakhalin Island) metro station.

In the course of complex interpretation of geophysical data (seismic and electrical exploration), generalized physical-geological models of the environment were constructed. The complex interpretation consisted in selecting the model parameters (within the limits of possible values that do not contradict the field data) equally well with geoelectric and geoseismic models, as well as with the results of mapping drilling. An example of such an interpretation in the Nevelsky Strait and the Amur Bay.

Both in electrical prospecting and seismic prospecting, the boundary between the foundation and the sedimentary cover stands out confidently. According to the data of electrical prospecting (first of all), as well as seismic prospecting, it was possible to divide the cover according to lithology and the degree of salinity of soils. At Cape Kamenny, seismic survey could not be completed due to landscape conditions. Here, data on the structure of the section are obtained from the results of electromagnetic soundings. 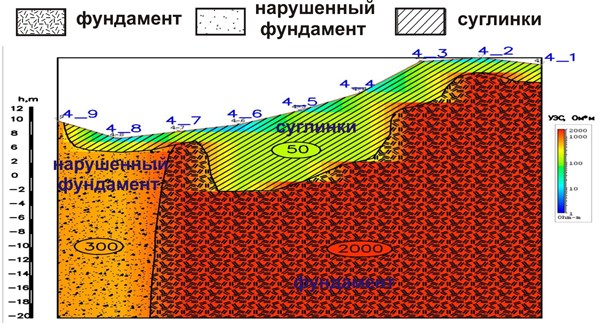 Integrated interpretation on the site of. Russian (Amursky Bay) a) geoelectric model, b) deep section

On the site of. Russian to perform seismic surveys in the eastern part of the island (on a cliff) also failed due to landscape conditions. However, in the central part, according to seismic surveys, a zone of heterogeneity in the basement, not detected by electrical prospecting, is well distinguished. 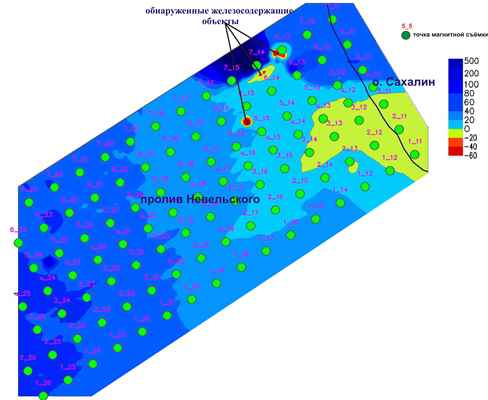 Map of the magnetic field in the area of Uangi metro station (Nevelsky Strait, Sakhalin Island)

In engineering and geological surveys, the choice of geophysical methods should be determined by natural conditions and geological problems that need to be addressed. In the case of studying the transitional land-sea zones, it is advisable to work in the winter period and apply a complex of electromagnetic methods.