The second joint Russian-American expedition was conducted from March 11 to April 18, 2012 in the southeastern part of the Laptev Sea (North-Western part of the Buor-Khaya Bay, east of the Lena River delta). The expedition included specialists from the POI FEB RAS, the Department of Geocryology, Geological Faculty, Moscow State University (VE Tumskoy, AV Koshurnikov, BA Bukhanov), the Institute of Oceanology. P.P. Shirshov (Moscow) and the University of Georgia (Athens, USA). The main task of the expedition was the drilling of deep (up to 100 m) wells on the shelf to measure gas content in bottom sediments. At the same time, the composition and structure of deposits, their density and humidity were studied. Thermometric observations were also carried out in the wells, the temperatures at which deposits began to freeze were determined. For the first time on the East Arctic shelf under the leadership of A.V. Koshurnikova conducted electromagnetic research. As a result of the work, 4 wells were drilled (maximum depth 58 m) with full coring. Data was obtained on the configuration of frozen strata on the shelf in the Bay of Buor-Khaya. The studies were carried out with the support of the RFBR grant No. 13-05-12015 ofi_m 2013-2015. "Mapping the boundaries of submarine permafrost and gas-discharge channels using geophysical data." 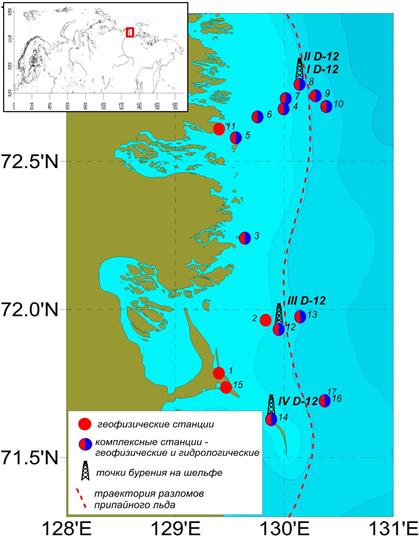 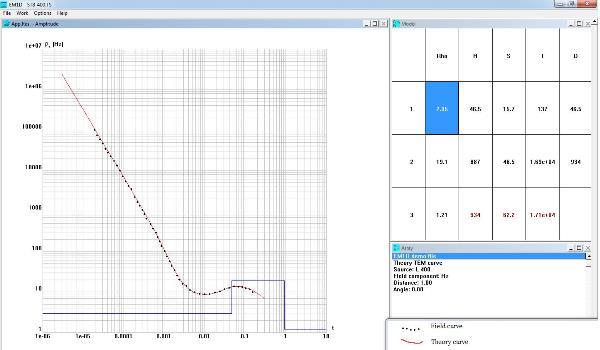 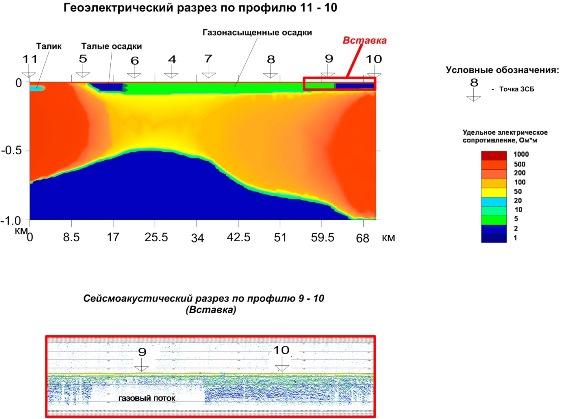 Comparison of drilling data, seismoacoustic and electromagnetic studies made it possible to identify zones with gas-saturated sediments (5 ohm-m) in the section and cut the roof of frozen rocks. At the moment, it is impossible to determine what causes a sharp transition from high-resistance rocks to low-resistance rocks in the lower part of the section, since no deep drilling data. Employees of MSU-Geophysics LLC and the Department of Geocryology at Moscow State University. Mv Lomonosov is engaged in modeling the permafrost situation in the Laptev Sea shelf, in order to test the hypothesis of the possible existence of thick permafrost strata or a zone of stability of gas hydrates.