Engineering and permafrost studies at the Kruzenshternskoye field of the Kara Sea (Sharapov Shar, Yamal Peninsula, 2010) 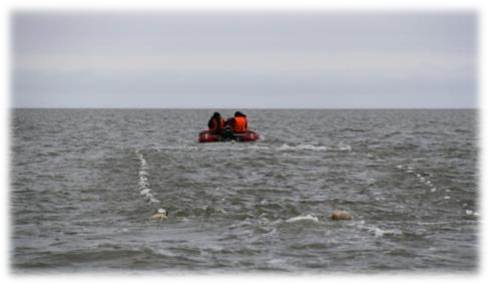 In the study of areas with continuous and insular distribution of permafrost, the use of inexpensive and sufficiently productive electrical survey methods in conjunction with engineering-geological drilling significantly increases the efficiency of geocryological engineering research. This is especially important for hard-to-reach areas of the Kara Sea shelf, where the development of the fuel and energy complex of Russia is associated with the development of new oil and gas fields.

Along the eastern shore of the Kruzenshternskoye field, behind the sandy beach, there is a steep, 4–15 m high sea terrace, the upper thin part of which (0.3–1.0 m) is composed mainly of sandy sediments, and the lower powerful and relatively homogeneous part is composed of mostly pure ice and frozen ground (Fig. 2).

In the shallow areas of the Kara Sea, soils are widely developed, containing in their composition free gas. Gas saturation zones are located in the depth range from the coastal edge to isobaths of 70-100m. The presence of free gas in bottom soils is expressed on time sections of seismic acoustic profiling in the form of zones of deterioration or loss of seismic correlation, bright spot anomalies and various acoustic inhomogeneities. When drilling geotechnical wells, the presence of gas in soils is evidenced by emissions of a gas-water mixture, and swelling of the core when it is extracted from the submersibles. Within the boundaries of the area of distribution of gas-saturated sediments of shallow-water areas of the Kara Sea shelf, a number of wells revealed permafrost. The geographical coincidence of the development zones of permafrost and gas-saturated sediments allows us to allow a paragenetic relationship between these two phenomena. It is assumed that the saturation of the sediments of the upper part of the section with free gas occurred as a result of the melting of frozen strata during the transgression of the modern basin.

The territory of the Yamal Peninsula is characterized by harsh climatic conditions, difficult geocryological conditions and requires the use of scientific and technical solutions adequate to these conditions for engineering and geocryological studies of the western coast of Yamal and the coastal shallow shelf zone of the Kara Sea.

The use of traditional DC electrical prospecting in the areas of permafrost is difficult because of poor ground conditions and the presence of shields in the surface layers. The technology of continuous seismic acoustic profiling is uninformative due to gas-saturated soils. 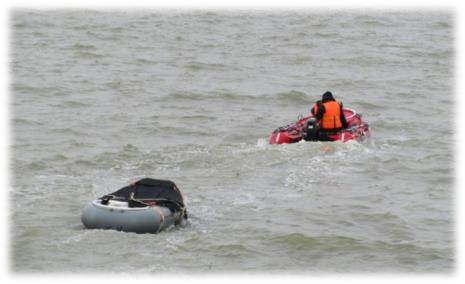 A comprehensive engineering and permafrost research at the Kruzenshternskoye field of the Kara Sea (Sharapov Bay Shar) was conducted in the summer-autumn period of 2010.

2. Sensing by the formation of a field in the near zone — TSB — averages the upper part of the section, but has sufficient depth of investigation. When processing and interpreting the data of the TSB method, several types of curves are distinguished (Fig. 4) that unequivocally indicate both areas with the presence of MMPs (black, red curves - where there is an ascending branch of the curve to the insulator), and areas with “thawed” type of cut (crimson curve). At the same time, there are areas where conductivity dramatically increases with depth (green curve). In these places, possibly, highly developed mineralized waters.

The data from the TSP method allowed us to map the upper boundary of the MMP in the Kruzenshternskoye field of the Kara Sea (Sharapov Bay Shar) and to identify areas of highly mineralized water (Fig.5, 6).

3. Magnetotelluric sounding - MTZ - is based on the study of the natural alternating electromagnetic field, has greater depth (Fig. 7).

4. Engineering-geological drilling to a depth of 40 ms by coring to clarify the geological structure of the upper part of the section. The presence of permafrost (Fig. 6) and cryopegs (Fig. 5) in the section is confirmed by forty-meter engineering and geological wells (well 6, well 75)

According to the results of the interpretation of geophysical data of the upper part of the geoelectric section and data of engineering and geological drilling, a map of the thickness of sandy loam and sands in the interval of 1-15m depth was constructed. (Fig. 8). It is characteristic that the maximum development of sandy-sandy strata according to geophysical data is noted in the southern and northern parts of the work area.

According to the results of the interpretation of geophysical data for the lower part of the geoelectric profile, a map of the development of permafrost rocks on the Kruzenshternskoye field of the Kara Sea was constructed. The map is based only on electromagnetic sounding data. Since the contrast of specific electrical resistances during the transition of rocks from the thawed to the frozen state is very large, the resistivity mapping in this model allows us to delineate the development of MMPs and talik on the work site (Fig. 9).

It is noteworthy that the capacity maps of the sandy-sandy layer and the development of the MMP are similar. In the central part of the area is the most developed clay and the most “frozen” section. In the northern and southern parts of the site, lenses of sands and sandy loams are strongly developed, in which highly mineralized waters are located.

According to the MTZ, the lower boundary of the MMP is mapped at depths of 100-180 m. The MMP sequence has a non-uniform structure. The upper part is up to 40 m more high-resistive - and, probably, more icy (outcrops of ice in these places were observed during the work), and the lower part less high-resistance, probably less icy. The upper part of the cryolithozone, with a thickness of about 180 m, is in a frozen state, below the boundary of the permafrost gas anomaly of low resistance takes place. Their nature seems to be related to chilled, highly mineralized waters (cryopegs).

Cryopegs are common in the frozen and thawed horizons of the cryolithozone. The salinity of cryopegs exceeds the salinity of seawater several times. The presence of cryopeg lenses in the area of MMP propagation has an effect on the temperature regime of sediments, reduces the carrying capacity, deformation and strength characteristics. High mineralization is the cause of the increased corrosivity of the soil.

In this paper, for the first time, the technology of continuous electromagnetic soundings in a complex of engineering-geological drilling for solving engineering and geocryological problems at the Kruzenshternskoye field (marine part) was proposed and tested under the conditions of the shallow shelf of the Kara Sea.

As a result, the MMP roof was mapped for the first time in the Kruzenshternskoye field of the Kara Sea by the ZSB method, and the MMP footplate in the transit zone (land-sea) by the MTZ method and outlined cryopeg lenses in the MMP thickness.