Study of the frozen foundation of the archaeological monument “Por-Bazhyn Fortress”, Tuva 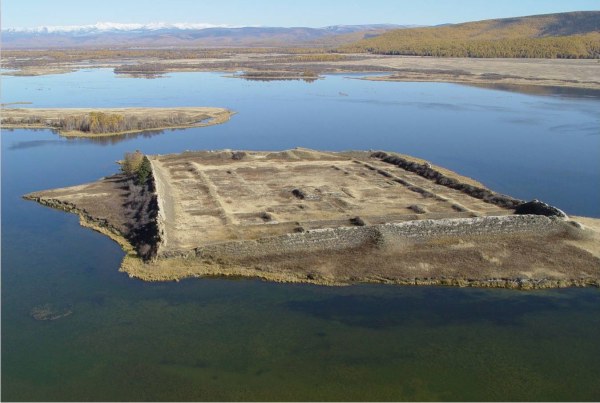 On a small (6 hectares) island in the mountain lake Tere-Khol (altitude 1300 m abs.) There is a unique archaeological monument - Por Bajin, which means “clay house” in Tuvinian. The lake is located in the southwest corner of the small depression of the Baikal type (Uflyand et al., 1969) and has an area of about 30 km². The monument, which looks very reminiscent of the remains of a fortress, has dimensions of 210 × 160 m.

The first researcher of the monument was a Russian archeologist and ethnographer D.А.Klements, who visited him in 1891 and left the first description and first hypotheses about his age and origin (Clements, 1895). Due to extreme inaccessibility, the first excavations on the monument were carried out only after more than 60 years by S.I. Weinstein. He dated the monument to the time of the Uygur Kaganate (mid VIII - mid IX centuries) and suggested that this is the very fortress that, according to the so-called Selenga inscription, built on the territory of present Tuva, the second ruler of the Kaganate - Bayan Chor in 750 AD (Weinstein, 1964).

Features of the layout, as well as the historical context, make researchers still make various assumptions about its functional purpose - a fortification, a palace complex, a monastery owned by representatives of Buddhism or Manichaeism (Arzhantseva, 2008). No less mysterious is the natural position of the monument. It is difficult to assume that it was originally built on the island, since it is unlikely that tens of thousands of tons of building materials could be delivered by water (Weinstein, 1964). All visitors to the monument, starting with D.A. Klements, local lamas told legends about the emergence of the monument, similar in one thing: it was built on land, but then from a well made inside a fortress for water supply, the water rose and flooded everything around. rapidly, that the owner of the palace and his retinue barely managed to get out of the fortress. Confirming or refuting these legends can only study the history of Lake Tere-Khol by natural-scientific methods.

In 2007, a large-scale project of systematic research of the monument was launched, stimulated by the threat of its possible imminent loss as a result of the destruction of the island. Indeed, the coast in some places closely approached the walls of the fortress. The project included, on the one hand, systematic research of the monument, on the other - the search for ways to preserve it. The first reconnaissance surveys showed that permafrost has developed on the island and in addition to the thermal destruction of the banks, there is a danger of subsidence during the thawing of permafrost strata. These processes can progress if the lake level rises. All this required a serious assessment of the geocryological conditions of the territory of the monument.

In the spring of 2008. On the island and the adjacent water area, geophysical studies were carried out using the methods of TEM and FS. ZSB were performed to map the structure of the lake basin, determine the thickness and structure of permafrost, as well as talik zones to a depth of 100 meters or more. Used equipment "Cycle-7" with generating and receiving loops 100x100m. 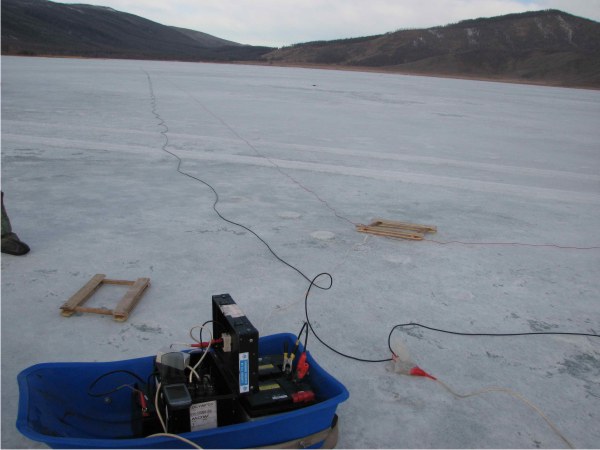 For a more detailed study of the upper (up to 30-50 m.) Part of the section, the FZ was carried out by the equipment developed and patented by MSU-Geophysics LLC. 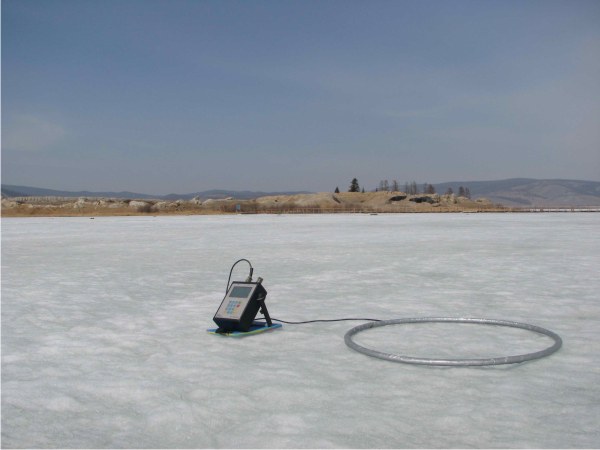 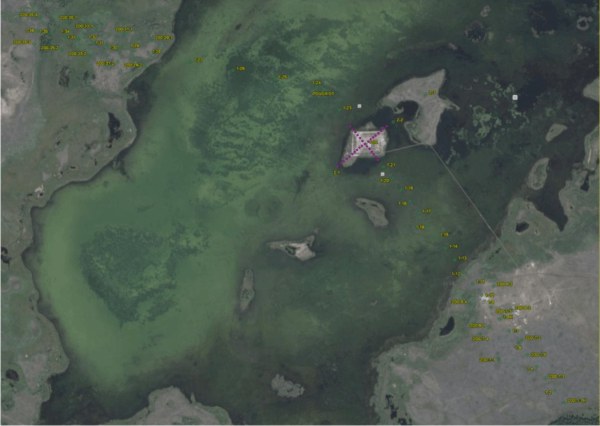 According to the results of geophysical studies were built a preliminary schematic section of the basin of the lake. Tere-Khol and geocryological section under the island "Por-Bazhyn fortress". The data obtained showed that the thickness of the permafrost under the island “Por-Bajin Fortress” is 25-30 m. Outside the lake, under the shores, the thickness of the permafrost reaches 170m. There are no frozen rocks below.

In addition to the permafrost data obtained from the results of geophysical work, data were obtained on the structural features of the intermountain basin., Showing the presence of a foundation at depths of 300 m and more. 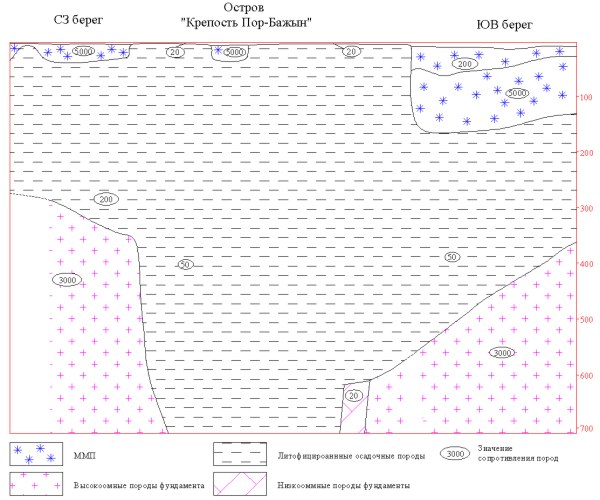 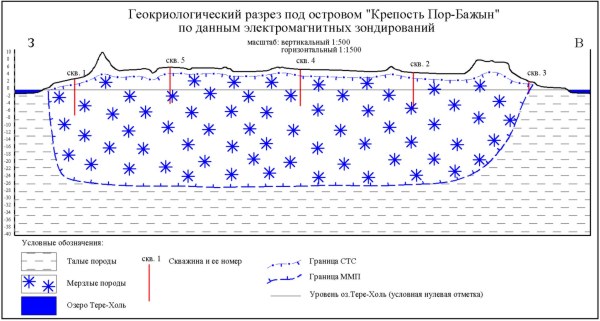 The upper part of the geocryological profile was confirmed by the results of drilling, which were carried out in the summer period. 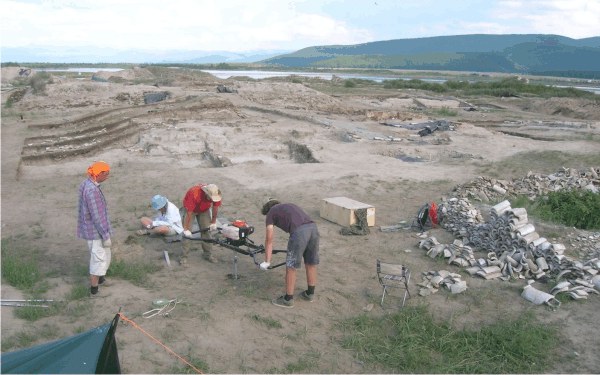 A total of 25 wells were drilled on the island with a depth of up to 10 m. The plan-height linking of the wells was carried out by the high-precision geodetic complex Leica Smart Station, which included a GPS base station on a permanent bench on the lake, a GPS-rover and an electronic total station. The well location map is shown in the following figure. 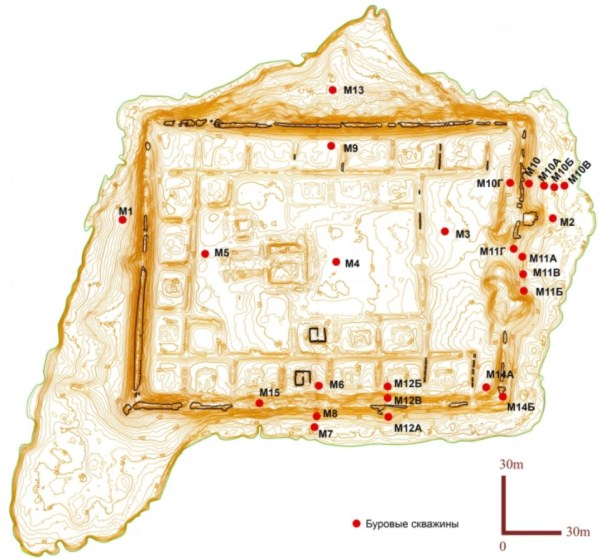 The total depth of penetration using a motor-drill was more than 110 m. The widespread presence of high ice MMPs, including under the walls of the fortress, was established. 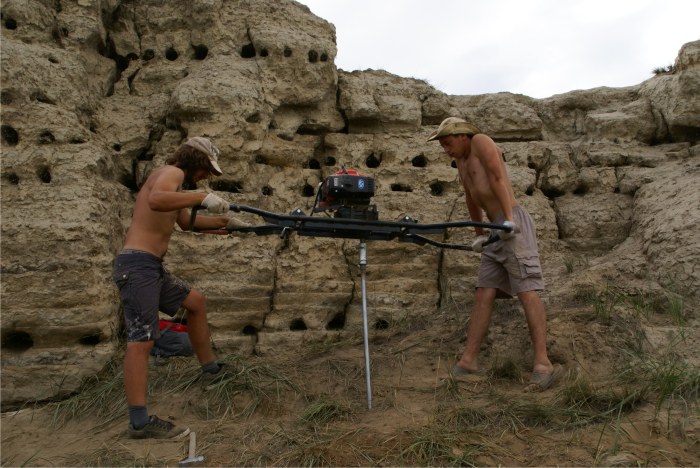 At a depth of 2 to 6 m, the ice content of soils varies from 60% to 90%, in some places - pure ice. At depths of about 6 m, sediment mechanical composition changes from organogenic silts and loams to sandy loam and sand with gravel. Together with the mechanical composition, the ice content of rocks varies significantly - it drops to 15-30%. Such a structure of the section can be traced in almost all wells.

In the process of drilling, a core was taken from each well, conserved and unresolved, delivered to Moscow for further study. Thermometry was performed in the wells. Drilling has shown that the base of the island, “Por-Bajin Fortress”, is composed of strongly icy loamy rocks, with temperatures ranging from minus 0.4 to minus 1 degrees C. 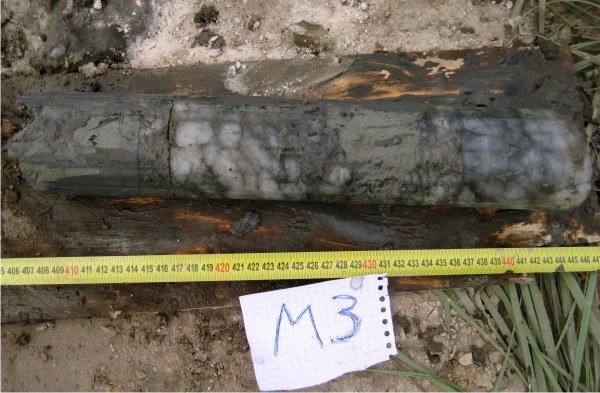 Organizational and financial support for research is provided by the Cultural Foundation “Por-Bazhyn Fortress”.